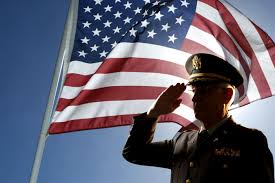 This Veteran's Day, consider these points when thanking a vet for serving, as the best way to honor them is to prevent more people from joining the service.

If you have served in any branch of the military, Veteran's Day has symbolic and emotional meaning others can only relate to empathetically, but might never fully grasp. Today, we honor those who fought for the United States, dedicating a portion of their lives in defense of what we, as a nation, hold dear — often returning scarred and battered inside and out.

A mythos exists about the armed services — indoctrinated veneration of men and women in uniform, and a call to duty — where, by design, the people of this land aren't taught to question war or the military, or the consequences reverberating into the past and future.

However, as a growing number of veterans will tell you in moments of bare honesty, taking up arms and donning a uniform isn't exactly about fighting for freedom — and the wounds sustained in battle physically and mentally haunt many former service members for reasons that have little to do with glory and honor.

Our military, as many have discovered, entices young people not even old enough to buy a beer to risk their lives — and the Pentagon and recruiters propagandize service as a patriotic, educational adventure and opportunity to work with state of the art technology and equipment. But what they don't explain are the horrors of the battlefield — and the truth about our government's motives for war.

So, this Veteran's Day, it's imperative to examine military service for what it truly entails — what the government actually asks of service members — and why the last thing we should do is ask more youth to join up.

Inveigling young Americans to join the military by touting free college and patriotism is perhaps the most dishonest hoodwinks the government could make. Indeed, service members do fight in the name of the United States, but wars abroad in modern times are far more complex than just good fighting evil — and much of that surrounds our many proxy wars.

While the Pentagon claims the U.S. fights terrorists, particularly of the Islamic State, in Syria and many other Middle Eastern countries — and to a degree, that's true — other terrorist groups are now considered our allies. In fact, certain offshoots of al-Qaeda — the exact radicals targeted by the U.S. in the years following 9/11 — receive funding and training from different agencies of our government.

Selling What the Nuremberg Code and Hippocratic Oath Ban