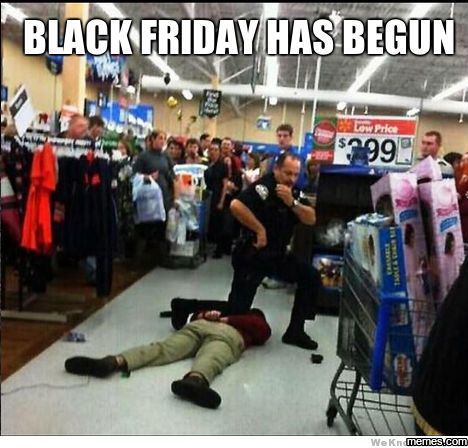 The elbows-out shopping bonanza began on Thursday night as stores across the country opened their doors early to crowds of frantic bargain hunters.

Within hours, there were mass brawls at malls as they fought over discounted televisions and clothes and the chaos is ongoing.

In Hoover, Alabama, the scrum in one mall became so violent that paramedics had to be called to treat the injured.

Walmart staff were filmed holding frothing female shoppers on the ground as they waited for security to arrive to carry them out.

The violence was even more severe in Missouri where a 19-year-old man was shot outside a mall as shoppers rushed to snap up cut-price goods inside.  He is in a critical condition.

On Friday, millions more flocked to shopping centers across the country as yet more deals became available.

At the Mall of America in Minneapolis, Minnesota, there were snaking lines before the sun had even come up. The crowds were organized by barriers.