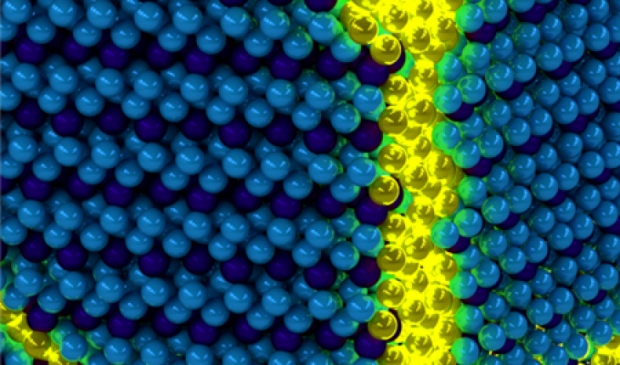 Above – Artist's depiction of the collective excitons of an excitonic solid. These excitations can be thought of as propagating domain walls (yellow) in an otherwise ordered solid exciton background (blue). Image courtesy of Peter Abbamonte, U. of I. Department of Physics and Frederick Seitz Materials Research Laboratory

It defies reason, but it turns out that when an electron, seated at the edge of a crowded-with-electrons valence band in a semiconductor, gets excited and jumps over the energy gap to the otherwise empty conduction band, it leaves behind a "hole" in the valence band. That hole behaves as though it were a particle with positive charge, and it attracts the escaped electron. When the escaped electron with its negative charge, pairs up with the hole, the two remarkably form a composite particle, a boson—an exciton.

Until now, scientists have not had the experimental tools to positively distinguish whether what looked like excitonium wasn't in fact a Peierls phase. Though it's completely unrelated to exciton formation, Peierls phases and exciton condensation share the same symmetry and similar observables—a superlattice and the opening of a single-particle energy gap.