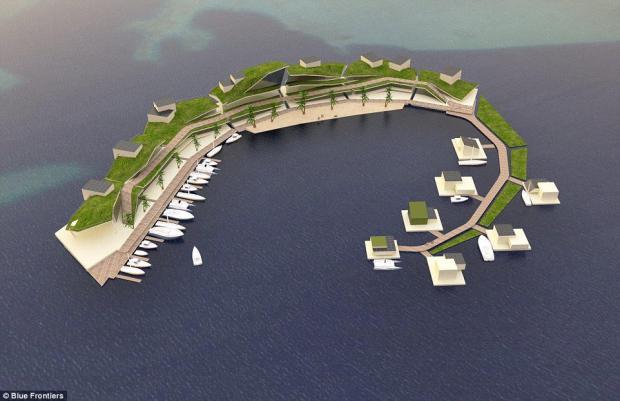 The plans will see the seabound city-state, complete with a handful of hotels, homes, offices, restaurants and more, built in the Pacific Ocean off the island of Tahiti in 2020.

Now, a series of computer generated graphics reveal how it might look once complete, with a design that blends futuristic technology with Polynesian traditions.

The scheme is the creation of the nonprofit Seasteading Institute, which hopes to 'liberate humanity from politicians'.

The radical plans could see the creation of an independent nation that will float in international waters and operate within its own laws.

'Seasteading' has long been the stuff of science fiction, drawing comparisons with the post-apocalyptic Kevin Costner movie Waterworld.

But the fantasy looks to be coming closer to reality with companies, academics and architects from the Seasteading Institute working on a prototype for construction at the turn of the next decade.

The latest concept images take inspiration from the rich Polynesian culture, in particular from traditional navigation, which is based on the observation and knowledge of natural elements.