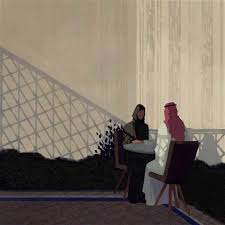 Long forbidden, dating has arrived in the ultra-conservative Gulf kingdom with some Saudis meeting and marrying without the help of relatives. Well-heeled millennials meet via Tinder, Snapchat, Twitter and Instagram.

While most restaurants still separate men and women into sections for men and "families," young couples are increasingly appearing in public together in a handful of cafes and other eateries.

"Two years back we wouldn't even be able to sit together — people would get the wrong idea," says Waleed, a 27-year-old software engineer with the square jaw of a model. "Change has come to Saudi Arabia." "Why would you date — where does this go?" Katherine Lam / for NBC News

Much of Waleed's "love relationship" with his girlfriend has taken place online. The pair finally met in person in Egypt, where gender mixing is more accepted than in Saudi Arabia, long dominated by a puritanical form of Islam that has been challenged recently by Crown Prince Mohammed bin Salman's push toward a more moderate interpretation of the religion.

"Our culture here, they make love a sin," Waleed said. Because sex and romantic love remain highly controversial subjects in the kingdom, interviewees spoke to NBC News on condition of anonymity, and pseudonyms have been used.

Saudi Arabia Running Out Of Money:

Is Trump Kicking the Saudis to the Curb the Beginning of Something Not Terrible?

Stop The Presses! Trump Reducing Military In The Gulf?

Why is the US removing its Patriot missile systems from Saudi Arabia?

US Pulling Patriot Missiles, Warplanes Out of Saudi Arabia Amid Dispute

"ISIS Has Nothing Over Saudi Arabia": Kingdom Reaches 800 Beheadings Under Salman

Is The Russia-Saudi Oil-Price War A Fraud And A Farce?