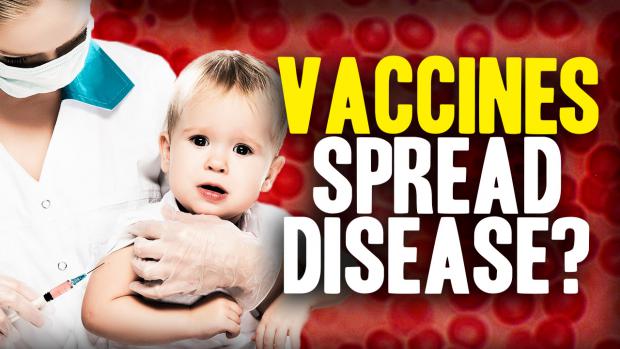 (Natural News) Hopped up on vaccine industry funds, the mainstream media went all out in 2015 trying to convince the public that unvaccinated children are spreading disease and endangering society. In tune with other lying mainstream media outlets, The International Business Times lied about the true source of disease while calling for the continued segregation of normal, healthy, unvaccinated children from society. The IBT asked the question: "Should a child whose parents chose not to vaccinate be allowed to share the same pencils and playground as children whose parents did?" In California, children who are not vaccinated are banned from school altogether under the chokehold of SB277. In other states, parents must conform to vaccine laws or beg for exemptions to get their kids into school.

The truth is many vaccines are formulated with live attenuated viruses that go through a process called viral shedding after injection into humans. These vaccines are clinically proven to spread disease for days, weeks, and sometimes months following vaccination. This not only puts the unvaccinated at risk, but poses a real threat to the immune-compromised.

To make matters worse, the live attenuated pathogens, once injected, are capable of replicating within host cells and reverting back to pathogenic form. Live virus vaccines are unpredictable and can cause the disease they are trying to prevent in the vaccine recipient. This is why live virus vaccines are not recommended for people with compromised immune systems, people on chemotherapy, people who are HIV positive, etc. Live virus vaccines include injections for the following: Tuberculosis, smallpox, adenovirus (oral), rotavirus, measles, mumps, rubella (combination), influenza, yellow fever, polio (oral), chickenpox, and shingles.

In 2011, a team of scientists looked specifically at how the shingles vaccine spreads the virus that causes chickenpox infection. The paper, authored by Duane L. Pierson, is titled, Varicella Zoster Virus DNA at Inoculation Sites and in Saliva After Zostavax Immunization.

What this proves is that, for up to a month after vaccination, those who receive the shingles vaccine are a threat to children. The study authors warn that "the detection of VZV DNA in saliva of Zostavax recipients for up to 28 days suggests that contact with saliva of recently immunized individuals represents a potential source of transmission."

Are They Planning To 'Vaccinate' the Masses Against Our Will?

Bombshell: Dr. Judy Mikovits Exposes The Vaccine Depopulation Agenda And What Comes Next

Trudeau Capitulates: Canada to Drop Vaccine Mandate at its Border

Lifelong Immunity - Why Vets Are Pushing Back

Pfizer Continues to Use Babies and Children as Lab Rats to Develop More COVID-19 Vaccines...