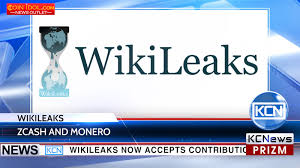 Wikileaks is reportedly set to begin accepting additional cryptocurrencies as a way to serve users who want to contribute to its media and whistleblowing efforts.

Announced by Wikileaks founder Julian Assange in a Tweet earlier this week, the comment follows news the Freedom of the Press Foundation (FPF), an organization that has helped process financial donations for Wikileaks via Visa, MasterCard and PayPal, abruptly halted its services.

As previously reported, Wikileaks started collecting donations in zcash in August, a move that followed its acceptance of bitcoin and litecoin.

Overall, Assange sees the FPF shutdown as "richly ironic" since it the organization was founded to stop economic censorship against Wikileaks.

"Like our response to the first banking blockade, (Wikileaks) will open up additional crypto-currencies. Those wanting to contribute to Wikileaks can already use bitcoin, litecon and the ultra-private monero and zcash."

He added that users can also purchase Wikileaks merchandise on its online shop can already use a variety of payment methods including cryptocurrencies.

Julian Assange's Case Is a Frightening Omen for Press Freedom

Assange Is Doing His Most Important Work Yet