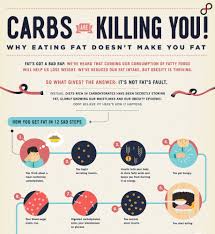 (Natural News) Since the 1970s, we've been conditioned to believe that dietary fats cause heart disease and it is what makes us fat.

However, it's eating too many carbohydrates that cause many diseases, as is evident in the obesity and diabetes epidemic of our time. In addition to that, a study published in the peer-reviewed medical journal The Lancet reported that people with high-carbohydrate diets have a higher risk of early mortality.

The findings of the study showed people who regularly included high-carbohydrate foods in their diet had a 28 percent increased risk of dying, as compared to other people who had a balanced diet.

Some critics of the study state that higher mortality rates may be due to a socioeconomic factor, and not just people's decisions in choosing their food. People tend to eat more carbohydrates if they cannot afford meat. Carbohydrates give them a sense of "fullness" to compensate for their lack of protein, which gives real contentment. Therefore, the necessity to include a lot of carbohydrates in one's daily diet is not a choice but may be due to the lack of finances to purchase healthier foods.

However, one may interpret the basis for including a lot of carbohydrates in the daily nutritional intake; it is still understood that carbohydrates pose a higher health risk than fats do. In light of this, researchers suggest a reduction of carbohydrates in favor of all kinds of fat, including saturated fats. They suggest a 35 percent daily intake of various fats while the American Heart Association (AHA) recommends eating polyunsaturated fats up to 15 percent daily.

Bread, rice, and pasta don't seem harmful at first sight, but how it is metabolized in the body poses a serious health risk. Carbohydrates are metabolized into glucose (a type of sugar), which the body uses as a source of energy. However, with a sedentary lifestyle, glucose is not used for energy and is stored in the body as fat. Too much body fat results in becoming overweight, and being overweight may lead to obesity, a fatal condition. Furthermore, obesity is also associated with other diseases such as cardiovascular diseases, stroke, and type-2 diabetes.