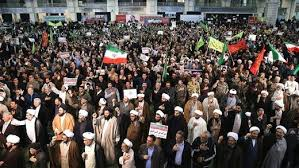 Earlier this month the White House and the Zionist prepared for a new assault on Iran:

A delegation led by Israel's National Security Adviser met with senior American officials in the White House earlier this month for a joint discussion on strategy to counter Iran's aggression in the Middle East, a senior U.S. official confirmed to Haaretz.

Another report about the meeting quotes Israeli officials on the result:

"[T]he U.S. and Israel see eye to eye the different developments in the region and especially those that are connected to Iran. We reached at understandings regarding the strategy and the policy needed to counter Iran. Our understandings deal with the overall strategy but also with concrete goals, way of action and the means which need to be used to get obtain those goals."

This is probably a result of the above meeting:

Hundreds took to the streets of Iran's second largest city of Mashad on Thursday to protest over high prices, shouting slogans against the government.