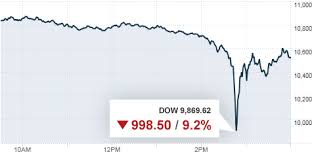 The most exciting stories from the morning's newspapers were reviews of the upcoming Iron Man 2 film.

But all that changed at around 2:45pm when, without warning, the stock market crashed, and the Dow Jones Industrial Average dropped 1,000 points within minutes.

It was unprecedented… especially because there was absolutely no reason why stocks should have fallen so much.

It's not like Apple had declared bankruptcy, or the Central Bank had jacked interest rates up to 50%. Up until that point it had been pretty quiet in the markets.

As it turned out, the reason behind the crash was that the investment banks' fancy trading algorithms had gone completely haywire.

Several of the largest banks had developed autonomous software that was capable of trading billions of dollars without the need for human beings.

And at 2:45PM that day, their software started to fail… inexplicably selling stocks to the point that prices collapsed nearly 10% in minutes.

They called it the Flash Crash, and, even though stocks had largely recovered by the end of the day, the banks lost an enormous amount of money.

Then something interesting happened. Within a few days, the major exchanges announced that they would CANCEL many of the trades that took place during the Flash Crash window.

In other words, they were handing the banks their money back.

I never forgot that moment… because I received an email from my broker informing me of the news.

They were canceling a profitable trade that I had placed during the Flash Crash window, effectively giving it back to the banks.

When the banks' trading algorithms performed well and they all made money, the profit was theirs to keep.

But when the software failed and the banks lost money from their own mistakes, the exchanges gave them a do-over.

Sadly that episode only begins to scratch the surface of all the ways that the market is rigged against the little guy– high frequency traders, brokerage rehypothecation, manipulation of interest rates, exchange rates, and asset prices, etc.

Owning shares of a successful business that's run by honest, talented executives can be a fantastic investment.

The key lesson for me, though, was that I should NOT buy unless the odds of success are remarkably in my favor… or as Jim Rogers says, to wait until the money is just lying in the corner, and all I have to do is walk over and pick it up.

The Propaganda of Terror and Fear: A Lesson from Recent History

Secrets Behind the Creepy Plague Doctor Mask and Costume

Plagues Over the Centuries Have Caused Radical Political Shifts...

We Heard the Bells: The Influenza of 1918

The Mightiest Empire Of All Time Fell Because Of A Bug...

The Crash Of 2020 Is Now Worse Than The Great Depression

30 Years Ago, My Country Declared Independence from the Soviet Union. Today...

"Wuhan" " Another "Bhopal" On An Enormous Scale, or Genocide?

What name did the Nazis call themselves?