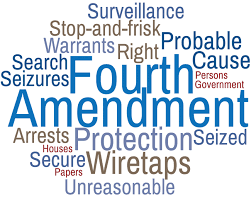 Hidden beneath the controversy stirred up last week by the publication of a book called "Fire and Fury," a highly critical insider's view of the Trump White House that the president has not only denounced on national television but also tried to prevent from being published and distributed, are the efforts of the Trump administration and congressional leadership to bypass the Fourth Amendment to the Constitution.

Here is the back story.

After the excesses of the Watergate era, during which the Nixon administration used the FBI and the CIA unlawfully to spy without warrants on the president's real and imagined domestic political opponents, Congress passed the Foreign Intelligence Surveillance Act. FISA prohibited all domestic surveillance except that which is pursuant to warrants signed by federal judges.

The Fourth Amendment — which guarantees privacy in our persons, houses, papers and effects — permits the government to invade that privacy only when a judge has signed a warrant that authorizes surveillance, a search or a seizure. And judges may only issue warrants when they have found probable cause to believe that the government surveillance or invasion of the target's privacy will produce evidence of criminal behavior. The Fourth Amendment further requires that the judicial warrant describe specifically the place to be searched or the person or thing to be seized.

All these requirements are in the amendment so as to prevent any court from issuing general warrants. Before the Constitution, general warrants were issued by British courts that met in secret in London. They were not issued based on probable cause of crime but issued based on the government's wish to invade the privacy of all Americans living in the Colonies to find the more rebellious among them. This was the king and Parliament's version of protecting national security.

General warrants did not describe the place to be searched or the person or thing to be seized. They authorized the bearer — usually a British soldier physically located in the Colonies — to search where he wished and seize whatever he found.

FISA did not interfere with the standard understanding or use of the Fourth Amendment by the government and the courts. But it did add another way for the government to invade privacy when its wish is to surveil people for national security purposes — a return to general warrants — as opposed to solely gathering evidence of crimes.

The FISA-created procedure, enacted in defiance of the Fourth Amendment — which makes no distinction between government evidence gathering and government intelligence gathering — permits a secret court in Washington to issue general warrants based on the government's need to gather intelligence about national security from foreigners among us. It pretends that the standard is probable cause of foreign agency, but this has now morphed into the issuance of general warrants whenever the government wants them.

Dr. Francis Collins On The U.S. Funding of the Wuhan Lab And Congressional Oversight

"You Are In Defiance Of Congress": Rand Paul Grills SBA Administrator About Planned Parent