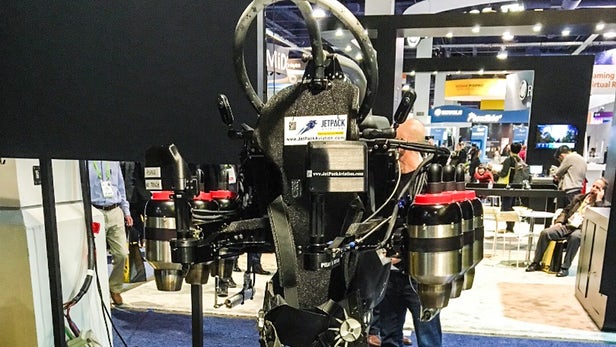 At CES 2018, the team was proud to unveil the next generation. The JB-11 takes safety to the next level, as well as speed and power. Using three smaller turbojet engines per side instead of just one, JB-11 can hit speeds over 150 mph (240 km/h). But more importantly, it's now got auto-stabilization tech built in, and in the event of engine failure, it can automatically re-balance the thrust to keep a pilot from spiraling into a messy doom.

Mayman is always fascinating to talk to – unlike many other personal aviation pioneers these days, he's always got time for a chat and is happy to discuss the process of developing and working on these alien-grade machines. We've always found him a great antidote to the Silicon Valley cocktail of hype and secrecy, he's an honest, grounded and forthright character. And a frickin' jetpack pilot.

We spoke to him yesterday about the JB-11, the process of FAA certification of jetpacks and VTOL flying cars, the process of getting jetpacks out into the market, and the options the team is looking at to get its flying car up and running in the absence of next-gen battery technology that's holding the whole sector up. What follows is an edited transcript.