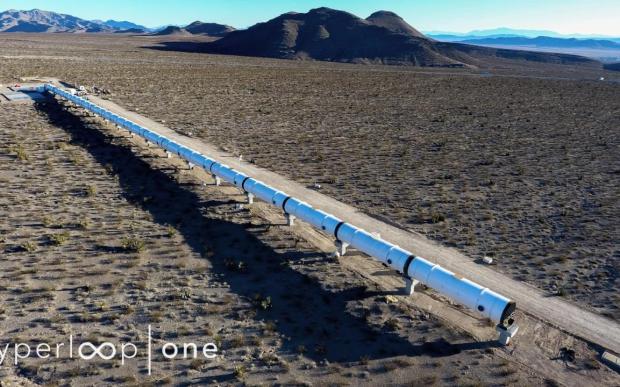 When the hyperloop first sparked a frenzy in 2013, it was just an Elon Musk Big Idea—very exciting, maybe possible, definitely hard to believe. Now, five years on, a version of the futuristic, tube-based transportation system is taking shape in the Nevada desert. Some 35 miles north of Las Vegas, the terrain is all sand, rock, and spiky shrubbery, leading up to stunning reddish mountains on the horizon. It's a world just isolated enough for Virgin Hyperloop One to build a giant white tube and not attract too much attention, apart from the few local tortoises that the secluded engineers have adopted.

"We did this whole construction in around 10 months," says Kevin Mock, senior test engineer. This is the first time the LA-based company has let any media in to see its test site, and as we walk around one end of the tube, I get the full impression of its length for the first time. One third of a mile long and nearly 11 feet in diameter, and reflecting the orange of the setting sun, it's just painted steel, wrapped with a few strengthening loops. "It's similar to a water pipe, but it was made to our specific specifications," Mock says.

The Big Idea reached the world when Elon Musk published a 57-page white paper outlining his thinking for firing levitating pods, carrying passengers or cargo through nearly airless tubes, at speeds up to 700 mph. Busy running both Tesla and SpaceX, Musk invited anyone interested to make it a reality. Virgin Hyperloop One (originally known as Hyperloop Technologies, then Hyperloop One, until Richard Branson came aboard as chairman in December) is one of the companies that materialized to give it a shot.

The hyperloop bears the Muskian hallmarks of radical futurism, but its brilliance is in the fact that it won't take a revolution to build one. It's really just a collection of existing transportation and industrial technologies. It's a chimera, part elevated structure, metal tube, bullet train, pressure vessel, and vacuum system, all smooshed together. The challenge is integrating them without smooshing paying passengers—or profit margins. Hyperloop One think it can launch a commercial system in 2021, which is why it's out here in the desert, with its test tube, aka DevLoop. This is where the company is working out the myriad engineering challenges, trying to make a system it can deploy commercially.

The company plans to run these tubes along pylons, which should be easy enough, and lets it avoid some of the engineering work that comes with laying heavy rail tracks along the ground.