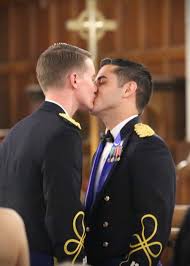 The men met at the school in August 2009, when Franchino was a freshman and Hall was a senior. Their first date was in February 2012 in Washington, some months after the "don't ask, don't tell" policy was repealed in September 2011.

That policy, in place since 1993, barred any gay person from disclosing their sexual orientation or talking about any same-sex relationship.

"It's really frustrating when two people have feelings for each other but are not allowed to act on them," Hall said. "We were serving under a policy that was telling all of us — perfectly capable soldiers, sailors, airmen and marines — to lie about ourselves."