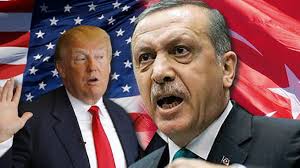 Turkish President Erdogan said Friday his troops will cleanse Manbij of Kurdish fighters, alongside whom US troops are embedded.

Erdogan's foreign minister demanded concrete steps by the US to end its support of the Kurds, who control the Syrian border with Turkey east of the Euphrates, all the way to Iraq.

If the Turks attack Manbij, the US will face a choice: Stand by our Kurdish allies and resist the Turks, or abandon the Kurds.

Should the US let the Turks drive the Kurds out of Manbij and the entire Syrian border area with Turkey, as Erdogan threatens, US credibility would suffer a blow from which it would not soon recover.

But to stand with the Kurds and oppose Erdogan's forces could mean a crackup of NATO and loss of US bases inside Turkey, including the air base at Incirlik.