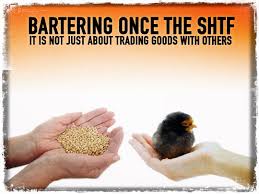 Barter is a hot topic in prepper circles, so I thought we should ask someone who has a lot of real-world experience with trade in a dangerous situation.

If you don't know Selco, he survived a year in Bosnia when his city was blockaded. Supplies were not allowed in or out, and residents were left without utilities and services. This interview is in his own words.

How quickly did people turn to barter once your city was locked down?

It was a matter of a few weeks.

Actually, for ordinary folks, it was a matter of few weeks because we did not get the new reality right at the beginning of everything.

Later when I remembered that period, I realized that even right at the beginning of SHTF there were people who did not want to take money for goods. They asked for valuables like gold, jewelry, or weapon for goods that they had.

Some of them were smart enough to realize that money was gonna become worthless really soon, and even gold and jewelry were only good in the first period, and then only if you had a connection to outside world to exchange it for something useful.

Ordinary folks needed few weeks. It was a process that went from buying goods with money, then buying goods from people who still wanted to take money (at outrages prices) to the moment when money was worthless, and only goods for goods were accepted.

Buying an RV to bug out. Is it a good idea or not?

Building a Solar Generator, Powerwall, System for off grid Tiny House on Wheels

How to Survive a Summer Power Outage