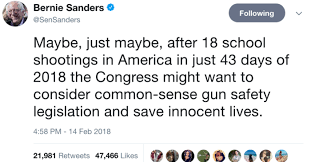 (Natural News) The American Pravda media has once again proven why fewer and fewer people trust them.

In the wake of the most recent school shooting in southern Florida, families, and friends of those killed hadn't even had time to fully comprehend their loss when the lying little Marxists in the "mainstream media" were hard at work cooking up the next anti-America, anti-gun, anti-Trump, anti-Republican lie.

Namely, that there have been 18 shootings at schools this year alone.

Does that sound like an awful lot? Of course it does, especially when we put it in the context of the most recent mass murder at another U.S. school.

As noted by Daniel Greenfield at FrontPage Magazine:

Every time a Muslim terrorist shoots, stabs, bombs or runs over Americans, the default response is, "Let's not jump to any conclusions". That's swiftly followed by media spin pieces claiming that the majority of terrorist attacks are really committed by white male Republicans and the Amish based on math so bad that even the world's crookedest bookie wouldn't go near it. And anyone who argues that the pattern of Islamic terror attacks is a call for common sense migration reform is regarded as a racist and a coward who wants to destroy the Constitution by blowing a handful of attacks out of proportion.

The same treatment rules for gun-control shills after each mass shooting don't apply. "…[W]henever a suburban shooting happens, especially in a school, it becomes a clarion call to dismantle the Second Amendment," he further notes. "And that's also backed by some of the world's worst statistics."

READ MORE  Florida H.S. student: We really thought this was a drill throughout much of it

It was supplied to the American Pravda media by former NYC Mayor Michael Bloomberg's gun grabbing group Everytown for Gun Safety, which "was being literally true, and false in every other way," Greenfield noted.

There were indeed 18 shootings at schools this year, but that figure includes suicides, accidental firearms discharges, and shootings in the general vicinity of a school — even when the school building was completely empty. And in about half the shootings, there were no injuries.

Christchurch terrorist WILL NOT say a word before he is sentenced for massacring 51 Muslim...

Holy Cow This Is A Big Story... And They Found Her!

One man is dead and 11 others wounded in Minneapolis shooting--

Nova Scotia shooter 'may have been a RCMP undercover agent'

Fort Worth, Texas: A Gunman Killed Two Worshipers at the West Freeway Church of Christ...