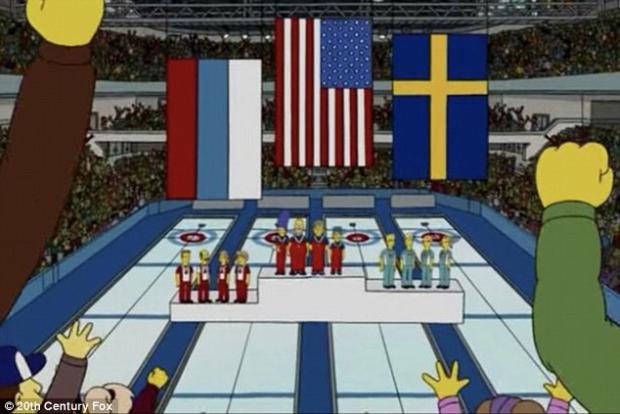 The Simpsons has once again predicted the future, this time with the results of the Winter Olympics Curling.

In a 2010 episode titled 'Boy meets Curl',  Homer and Marge take up curling, and they, along with Principal Skinner and his mom, lead the US Team to a gold medal during that year's games in Vancouver.

Ironically in that episode, the Simpson's team beat Sweden, just as the USA did in a shocking upset victory over Sweden inPyeongchang on Saturday.

This isn't the first time the cartoon, now in its 29th season, has made a joke that turned out to be prescient.

They 'predicted' the Ebola outbreak, Greece's economic difficulties, and a horse meat scandal.

Five years before she dove into the NRG Stadium to perform her Super Bowl halftime show, Lady Gaga was the subject of a Simpsons episode called  'Lisa goes Gaga',in which a Gaga like character descends on Springfield to perform

The Hungarian Uprising Against the Woke West