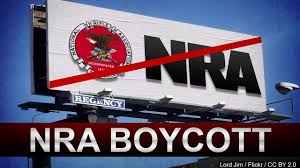 In the wake of the school shooting at Douglas High School in Parkland, Florida, the left has already ramped up their calls for everyone, everywhere to boycott the National Rifle Association (NRA).

For years, the NRA has been the boogeyman hiding in the closet of every leftist, anti-freedom hater in America. The Democrats and their friends in the media love to hate the NRA and often attack them as a "gun lobbyist" group. This gun lobbyist epithet is not entirely accurate because the NRA doesn't necessarily lobby for the gun industry or gun companies… no, they lobby for regular American citizens who support the 2nd Amendment.

The NRA says that they have upwards of 5 million dues-paying members, a 2017 Pew Research Center Study "found that more than 14 million Americans consider themselves NRA members, above the real membership number of 5 million. This may be attributed to the fact that the NRA has millions more of Americans who support them and will tell pollsters they are members, even when they are not. In other cases, it could be that their membership has lapsed and for others, they might consider a family member's membership part of their own."