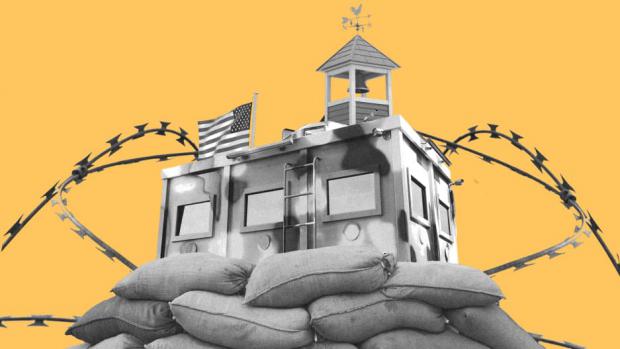 In 2013, the NRA had some ideas for how to stop school shootings–including thorny bushes.

In the aftermath of the Parkland shooting this month, the focus of the NRA and President Trump has been on arming teachers. But after the Sandy Hook shooting in 2013, an NRA task force published a report that detailed other measures schools should take to secure themselves against shootings–including architectural ones, as Mother Jones' Stephanie Mencimer reported last week.

The 225-page document, available here, outlines a number of measures that the NRA suggests schools take to protect children and teachers against shootings. The task force behind the report was led by Asa Hutchinson, the current governor of Arkansas, and includes former law enforcement, Homeland Security, and military officers, as well as the CEO and four employees of Phoenix RBT Solutions, a supplier of "reality-based training solutions for law enforcement, military and private sector security."

It invokes CPTED, or Crime Prevention Through Environmental Design, the controversial 1970s-era theory that the design of spaces could stop crime, and lists a number of defensive measures that fall under its umbrella. That includes descriptions of how schools themselves should be planned (like an onion, with independent "layers of defense") down to details like material choice ("use fencing material that clearly demonstrates territorial ownership," the authors suggest). It is a sickeningly frank set of design standards and protocols for an era of regular mass shootings.

Me and the NRA

The N.R.A. and Wayne LaPierre's Next Foe: One of Their Own