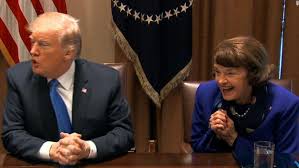 Perhaps most remarkably, Trump even made a comment that sent Sen. Dianne Feinstein, the Democrat from California, into a fit of joy.

After Sen. Amy Klobuchar (D-MN) spoke about her desire to expand background checks with the aim of curbing domestic violence, Trump asked Sen. Pat Toomey (R-PA) if he could add her proposal to his bipartisan bill with Sen. Joe Manchin (D-WV).

"Dianne if you could add what you have also – and I think you can — into the bill," Trump then suggested.

Well, as it turns out what Feinstein has is a ban assault weapons — a proposal that is anathema to Republican lawmakers and the NRA.

Feinstein's response was positively giddy, and the Democrat pointed at Manchin and joked "Joe are you ready?"