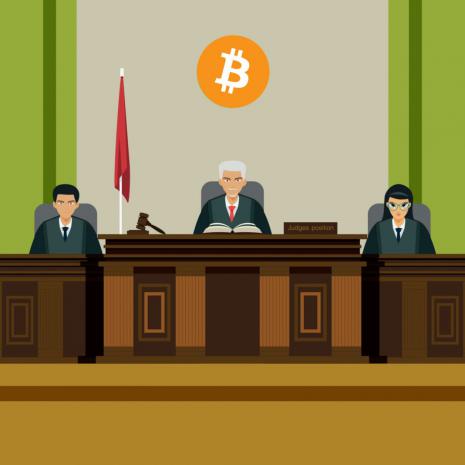 Bitcoin was born on the internet but destined to end up in court. Where there's money, there's a trail of gold-diggers, scammers, and slighted plaintiffs, and as bitcoin has risen in value, so have the court cases. With lawsuits, threats of litigation, subpoenas, and regulators sending gavels slamming in courtrooms across the land, this week's got it all. Get your popcorn at the ready as we prepare to chew over the highlights from This Week in Bitcoin.

The biggest winners in cryptocurrency this week seem to be the lawyers – unless you're one of the attorneys the SEC is reportedly chasing for issuing dubious advice to ICOs. The number of crypto startups subpoenaed by the SEC could be anywhere from a dozen to 80 depending on who you believe. The truth is, no one, outside of the Securities and Exchange Commission, seems to know. Techcrunch founder Michael Arrington is confirmed to be one of the lucky winners of an SEC subpoena; the remainder are keeping schtum for now. Rarely a week goes by when the SEC doesn't loom large the cryptocurrency news cycle, which has more to do with the spate of dodgy ICOs than it does with the agency's love of the limelight (though it's certainly not publicity shy). This week's second most popular story also involved the SEC, indirectly at least: Poloniex exchange is being bought by Circle – possibly with the approval of the SEC, if the contents of a leaked slide from a Circle employee is accurate.

The other legal bombshell that dropped is of the salacious kind. The Craig Wright case has got it all – stolen bitcoins, billions of dollars at stake, Satoshi Nakamoto, forged signatures, fake wallets. The lawsuit, should it come to court, is sure to provide high entertainment for everyone captivated by the sideshow that is Craig Wright and his claim to have been Satoshi Nakamoto, even though technically that's not what this case is about. We wrote:

It is put forward that Mr. Wright conspired against the ignorance of Mr. Kleiman's family after his death in 2013. Because Mr. Kleiman's heirs were unaware of their family member's bitcoin efforts and potential bounty, "Craig perpetrated a scheme against Dave's estate to seize Dave's bitcoins and his rights to certain intellectual property associated with the Bitcoin technology".

Bitcoin Surges Back Above $40,000 Ahead Of Biden Budget Briefing

Getting paid in Bitcoin and Cryptocurrencies : The Bitcoin.com Weekly Update

How Bitcoin Hits $100,000 Next: Morgan Stanley Boosts Stake In Microstrategy...

Gamblers Could Use Bitcoin at Slot Machines With New Patent