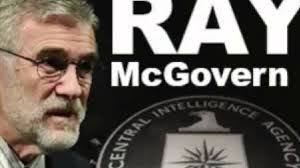 Now that I have been nominated again – this time by author Paul Craig Roberts – to be CIA director, I am preparing to hit the ground running.

Last time my name was offered in nomination for the position – by The Nation publisher Katrina vanden Heuvel – I did not hold my breath waiting for a call from the White House. Her nomination came in the afterglow of my fortuitous, four-minute debate with then-Defense Secretary Donald Rumsfeld, when I confronted him on his lies about the attack on Iraq, on May 4, 2006 on national TV. Since it was abundantly clear that Rumsfeld and I would not get along, I felt confident I had royally disqualified myself.

This time around, on the off-chance I do get the nod, I have taken the time to prepare the agenda for my first few days as CIA director. Here's how Day One looks so far:

Get former National Security Agency Technical Director William Binney back to CIA to join me and the "handpicked" CIA analysts who, with other "handpicked" analysts (as described by former National Intelligence Director James Clapper on May 8, 2017) from the FBI and NSA, prepared the so-called Intelligence Community Assessment (ICA) of Jan. 6, 2017. That evidence-impoverished assessment argued the case that Russian President Vladimir Putin ordered his minions "to help President-elect Trump's election chances when possible by discrediting Secretary Clinton."

When my predecessor, CIA Director Mike Pompeo invited Binney to his office on Oct. 24, 2017 to discuss cyber-attacks, he told Pompeo that he had been fed a pack of lies on "Russian hacking" and that he could prove it. Why Pompeo left that hanging is puzzling, but I believe this is the kind of low-hanging fruit we should pick pronto.

The low-calorie Jan. 6 ICA was clumsily cobbled together:

"We assess with high confidence that Russian military intelligence … used the Guccifer 2.0 persona and DCLeaks.com to release US victim data obtained in cyber operations publicly and in exclusives to media outlets and relayed material to WikiLeaks."

Binney and other highly experienced NSA alumni, as well as other members of Veteran Intelligence Professionals for Sanity (VIPS), drawing on their intimate familiarity with how the technical systems and hacking work, have been saying for a year and a half that this CIA/FBI/NSA conclusion is a red herring, so to speak. Last summer, the results of forensic investigation enabled VIPS to apply the principles of physics and the known capacity of the internet to confirm that conclusion.

Oddly, the FBI chose not to do forensics on the so-called "Russian hack" of the Democratic National Committee computers and, by all appearances, neither did the drafters of the ICA.

Again, Binney says that the main conclusions he and his VIPS colleagues reached are based largely on principles of physics – simple ones like fluid dynamics. I want to hear what that's all about, how that applies to the "Russian hack," and hear what my own CIA analysts have to say about that.

I will have Binney's clearances updated to remove any unnecessary barriers to a no-holds-barred discussion at a highly classified level. After which I shall have a transcript prepared, sanitized to protect sources and methods, and promptly released to the media.

The Pentagon and CIA Might Decide Who Is President