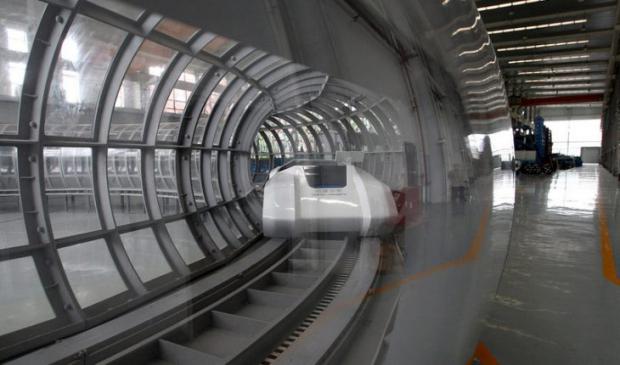 A maglev (magnetic levitation) line would use partly or fully evacuated tubes or tunnels. Reduced air resistance could permit vactrains to travel at very high speeds with relatively little power—up to 6,400–8,000 km/h (4,000–5,000 mph). This is 5–6 times the speed of sound in Earth's atmosphere at sea level.

China has slashed air pressure in a test track tube to as low as 2.9 centibars, or 2.9 kilopascal units of pressure, in experiments on the 6-meter-diameter test run at a maximum speed of 50 kilometers per hour. Standard atmosphere pressure is 101.325 kilopascals. The pressure is 33 times lower than normal air pressure.

A proof-of-principle prototype for a 45-meter track has been developed by Deng Zigang and his team from the applied superconductivity laboratory at Southwest Jiaotong University in Chengdu.

ET3 is literally "Space Travel on Earth". ET3 is silent, low cost, safe, faster than jets, and is electric.

Car sized passenger capsules travel in 1.5m (5′) diameter tubes on frictionless maglev. Air is permanently removed from the two-way tubes that are built along a travel route. Airlocks at stations allow transfer of capsules without admitting air. Linear electric motors accelerate the capsules, which then coast through the vacuum for the remainder of the trip using no additional power. Most of the energy is regenerated as the capsules slow down. ET3 can provide 50 times more transportation per kWh than electric cars or trains.

Speed in initial ET3 systems is 600km/h (370 mph) for in state trips, and will be developed to 6,500 km/h (4,000 mph) for international travel that will allow passenger or cargo travel from New York to Beijing in 2 hours. ET3 is networked like freeways, except the capsules are automatically routed from origin to destination.

ET3 capsules weigh only 183 kg (400 lbs), yet like an automobile, can carry up to six people or 367 kg (800 lbs) of cargo. Compared to high speed rail, ET3 needs only 1/20th the material to build because the vehicles are so light. With automated passive switching, a pair of ET3 tubes can exceed the capacity of a 32 lane freeway. ET3 can be built for 1/10th the cost of High Speed Rail, or 1/4th the cost of a freeway.