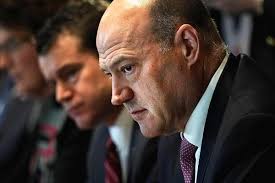 Separately, Bloomberg reports that Trump confronted Cohn hours before the resignation, demanding his cooperation on tariffs in a meeting in the Oval Office Tuesday, and asking Cohn directly if he would support his decision to move forward with the plan. Cohn would not offer his support and just hours later, the White House announced Cohn's resignation.

According to one source with knowledge of the exchange, Trump specifically asked Cohn: We're all on the same team, right? He then asked if Cohn was going to support the president on the issue. Cohn didn't answer.

As we detailed earlier, tThe great power shift we predicted  one week ago, was just confirmed by the NYT which reported that Gary Cohn, former Goldman president and COO and President Trump's top economic adviser, is resigning, "the latest in a series of high-profile departures from the Trump administration, White House officials said on Tuesday."

President Trump has confirmed Cohn's departure: "Gary has been my chief economic advisor and did a superb job in driving our agenda, helping to deliver historic tax cuts and reforms and unleashing the American economy once again. He is a rare talent, and I thank him for his dedicated service to the American people."