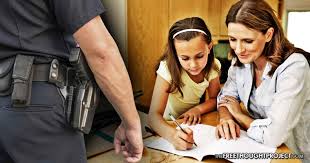 Maryland — Under the guise of preventing child abuse, lawmakers in Maryland have introduced a bill that will allow the state to intrude in the lives of innocent families, keeping tabs on them, and destroying their right to privacy.

The bill, HB 1798 – County Boards of Education – Home Instruction Program – Observation of Instruction and Reporting of Abuse and Neglect, lays out some fairly ominous requirements that will persecute otherwise entirely innocent families for doing nothing other than teaching their children at home.

According to the bill's text, it will establish grounds for parents to essentially register with the state and be subject to some of the same constraints as the public education system. But that is only the beginning. This bill also lays out the framework for involuntary home inspections in which state agents will enter a family's home multiple times a year—likely unannounced—and observe and inspect the homeschooling process.

This bill would require parents to annually inform their county school boards of their homeschool child's primary instructor and of the primary location where homeschooling is taking place each year. Furthermore, in order to legally homeschool in the state of Maryland, parents would be required to allow a representative of the county board to observe instruction at the family's primary homeschooling location at least twice a year. Finally, this bill would require county school board employees who observe a family's instruction and who believe a homeschool child has been subjected to abuse or neglect to report their suspicion to the proper authorities.

This bill, like the similar one proposed in California last month, was a reaction to the horrific scene that unfolded in mainstream media in the case of David and Louise Turpin. The couple is facing 12 counts of torture after police learned that their 13 children were severely malnourished, forced to stay chained to their beds, and living in horrific conditions, among other forms of torture that have been ongoing for several years.

READ MORE  How is this not racism? Texas university students launch "No Whites Allowed" magazine

Instead of realizing the problem of child abuse has nothing at all to do with homeschooling, lawmakers across the country are using this moment to demonize parents who wish to teach their children outside of the state.

When asked why he proposed the bill, HB 1798's cosponsor, Delegate Frant Turner said it was in response to "recent news about homeschoolers," indicating that he is also exploiting this tragedy to push for more government control.

Baltimore Activist Urges City To Pay Criminals Not To Murder

This election, and the next could see the end of the Democrat party was we know it.