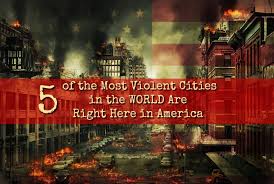 When you think of the most dangerous, violent cities in the world, do you picture slums in Third World countries with vicious drug cartels or arrogant warlords? Maybe the kind of violence where enemies are decapitated and whole families are murdered seem like things that happen far away in some terrifying, exotic locale.

Some of this is true – but FIVE of the world's most violent cities are right here on the American mainland and another is in an American territory. The list was created by researchers of anti-violence think-tank Seguridad, Justicia Y Paz (Security, Justice, and Peace), who made their rankings based on statistics of homicides per 100,000 residents.

The vast majority of the cities on the list were in Central and South America. Interestingly, the violence in Venezuela appears to have dropped in violence this year, but not because it's suddenly become a mecca of safety. The official situation there has devolved so much that they simply can't track all the homicides.

But back to America

We pride ourselves on our first world status and civilized societies, and yet four of our cities ended up on the list of the most dangerous and violent locales on the planet.