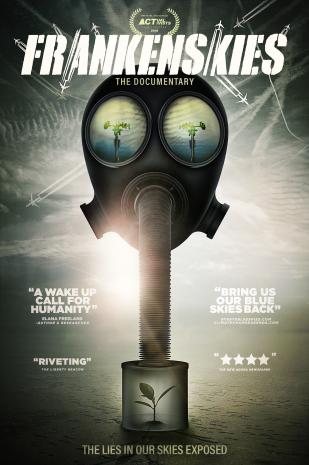 FrankenSkies is a feature length documentary film about the Solar Geongineering Governance Regime.

FrankenSkies is an 80 minute social change documentary regarding the Solar Geoengineering/Chemtrail agenda that affects every living being on earth. The struggle of bringing awareness to this subject, despite the obstacles of a socially engineered populace and the military industrial complex with its endless resources, is palpable in this awakening truth feature.

An impeccably timed eye opening exposé, the film reveals the campaign to normalize chemical cloud formations via atmospheric aerosol dispersals. Up against a normalization timetable encompassing a controlled media and an indoctrinated educational and political system, activists ask the question : Is your silence your consent?

A shocking informative film on climate engineering, frequency control and CIA manipulation, the film's narrative unfolds through a historical timeline of experimentation on humanity, bringing us to a modern day laboratory that encompasses the air we breath and dictates when and where the sun shall shine, or not...