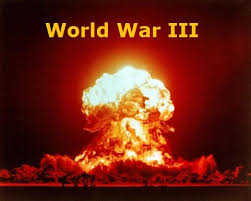 Recently, the news has been all abuzz with teen activists who want to take away our guns but refuse to use clear backpacks, the Facebook privacy scandal, and how someone bit Beyonce in the face. But there are three recent events that aren't getting much press which tell us it is entirely possible that we could be headed toward World War III at worst and toward an economic collapse at best.

During the election, it really seemed as though Hillary Clinton as president would be a much more likely path to World War III. She even gloated of the actions she planned to take that would have led directly and immediately to war. Donald Trump as president seemed less likely to get us into a war with Russia, but it appears the tides may have turned back in that direction.

We're already at financial war with China due to punitive trade tariffs that our governments are instituting on one another. President Trump wants to rebalance global trade in America's favor, and China isn't going to go down without a fight. Here's more information on the list of tariffs the US wants to charge for Chinese merchandise and the retaliatory list from China.

The last time we were involved in a major trade war, the Great Depression happened, according to an economics expert for CNN.

America's last trade war exacerbated the Great Depression in the 1930s, when unemployment rose to 25%. Claiming it was protecting American jobs, Congress passed the Smoot-Hawley Act in 1930. The original bill was meant to protect farmers. But to build political support, many lawmakers asked for tariffs — or taxes — on all sorts of goods in exchange for their vote.

Several nations, such as Canada, slapped steep tariffs — or taxes — on US goods shipped and sold abroad. For example, US exports of eggs to Canada fell to 7,900 in 1932 from 919,000 in 1929, according to Doug Irwin, a Dartmouth professor and former trade adviser to President Reagan.

The result: US imports fell 40% in the two years after Smoot-Hawley. Banks shuttered. Unemployment shot up. Surely, there were a litany of factors at play. But economists widely agree Smoot-Hawley made the Great Depression much worse than otherwise. (source)

And what happened at the end of the Great Depression? World War II happened, and this ended the unemployment and resulted in a spending frenzy that pumped up the economy. There's always an increase in the GDP during wartime due to defense spending. But that is one hell of a bad way to fix the economy, don't you think?

As of Monday, March 27th, the US has lost petrodollar status. The petrodollar now has competition in the form of the petroyuan. What this means is that previously, the only way anyone in the world could buy oil was to use US dollars to do so. This kept the value of our currency high. But now, Russia and China are buying oil using the yuan. Others may soon follow because the United States has ticked off a majority of the planet in the past century.

What does this mean for Americans? Inflation. Major inflation. If our dollar is worth less on the global scale, it means that anything we import is going to cost more.  If you want the super-detailed economic explanation, this article and video will provide the in-depth info you want on the history and potential collapse of the petrodollar.