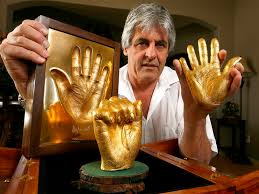 A Canadian businessman agreed to sell four gold castings of South African leader Nelson Mandela's hands. For $10 million in bitcoin, a cryptocurrency firm launching an initial coin offering (ICO) has agreed to the purchase, promising a world tour of the art pieces in an effort to educate more people about Madiba's legacy.

South African-turned-Canadian businessman Malcolm Duncan has sold the four piece Nelson Mandela Golden Hands Collection, castings in gold of the South African leader's hands. Canadian cryptocurrency company and aspiring exchange, Arbitrade, is delivering a total of 10 million USD in bitcoin for the prize. The marketing strategy is an interesting juxtaposition of history and the future, radical politics and radical free marketism, and Arbitrade's curious business plan. The firm plans an upcoming ICO, mining operations, and a token supposedly backed by gold — thus the grandiose purchase.

Mr. Mandela was the first black president of South Africa, after a period of mandatory racial apartheid. He was charged in 1962 with violent insurrection against the government, and served nearly three decades in prison. President F.W. de Klerk released him in 1990, and the country has been on the long process of reconciliation and power sharing ever since. His advocacy of socialism might pose a philosophical problem for followers, considering go-go capitalism appears to have a piece of his legacy. He died in 2013 at the age of 95. Huge swarms of locusts rip through 500,000 acres of crops in Ethiopia...