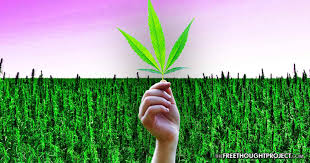 The many Americans who have called out the federal government for waging a war on hemp and improperly classifying it as a dangerous substance have found an unlikely ally in a senator who still believes marijuana should be illegal.

Senate Majority Leader Mitch McConnell announced that he will introduce the Hemp Farming Act of 2018, which seeks to remove hemp from the federal government's controlled substances list and to legalize it as an agriculture commodity. A press release from the senator claimed that the bill seeks to:

"The Hemp Farming Act of 2018 will help Kentucky enhance its position as the leading state on hemp production. It builds upon the success we have seen through the hemp pilot programs by allowing states to be the primary regulators of hemp if the U.S. Department of Agriculture approves their implementation plan. This legislation also will remove the federal barriers in place that have stifled the industry, which will help expand the domestic production of hemp. It will also give hemp researchers the chance to apply for competitive federal grants from the U.S. Department of Agriculture—allowing them to continue their impressive work with the support of federal research dollars."

When McConnell introduces the legislation, he will have the support of a bipartisan group of senators that includes fellow Kentucky Sen. Rand Paul. McConnell noted that hemp has played a significant role in Kentucky's agricultural heritage, and he believes it will help shape the future.

McConnell also credited Agriculture Commissioner Ryan Quarles and his predecessor, Jamie Comer, as the "real champions for the research and development of industrial hemp" whose work in Kentucky has "become a nationwide example for the right way to cultivate hemp."

Quarles said he believes the Hemp Farming Act of 2018 will allow the agricultural industry to "harness the economic viability of this crop and presents the best opportunity to put hemp on a path to commercialization."

"Here in Kentucky, we have built the best Industrial Hemp Research Pilot Program in the country and have established a model for how other states can do the same with buy-in from growers, processors, and law enforcement," Quarles said.