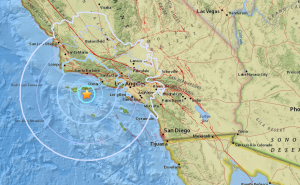 The temblor hit beneath the Pacific Ocean about 12:29 p.m., at a depth of about 10 miles beneath the surface, USGS reported. It was centered about 41 miles southwest of Ventura and 85 miles west of Los Angeles.

It was produced by offshore faults that "are part of the system that moves Southern California around a bend of the San Andreas fault," seismologist Lucy Jones tweeted.

Jones, formerly of the USGS, described it as an earthquake of "moderate" size.

There were no immediate reports of injuries or damage, according to law enforcement and fire agencies across Southern California.

The Los Angeles Fire Department went into "earthquake mode" following the shaking, but was back in normal operation mode once a survey of the city was completed.

Shaking was felt all along the coast, from the San Luis Obispo area to the north to San Clemente in the south, USGS reported.