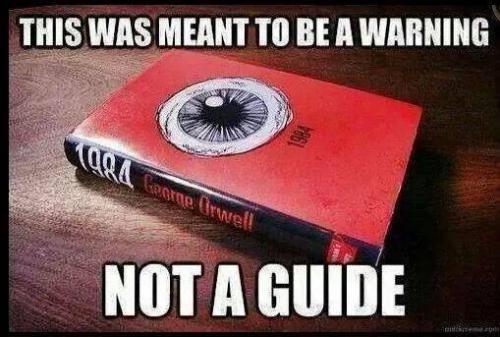 There were two other superpowers, namely Eurasia and Eastasia. Other lands rich in resources were contested over, such as Africa and assumingly South America…lands never kept by any of three Super-states for any significant period. The "flux" in conquests was exactly what the MIC (Military Industrial Complex) of our time would have termed "necessary" to justify large expenditures: War as the focal purpose, rather than the exceptional event.

We see a parallel in today's world with huge defense budgets and troop deployments keeping the contracts on the move and siphoning off a considerable amount of national revenues to keep the patriotic war machines moving...irrespective of each nation. The psychology: keep the population agitated and on a continual war-footing, using a "threat" (either real, created, or imagined) to accomplish this.

You are witnessing the final alignment of those spheres of influence that are almost identical to the novel that Orwell wrote. Look at the situation with the alleged Russian poisoning of an intelligence operative and his daughter in Britain. The United States showed "solidarity" with Great Britain by expelling 60 Russian diplomats and closed the Russian consulate in Seattle, Washington. Russia countered by ordering the expulsion of an equal amount of American embassy personnel.