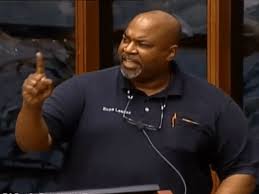 (Natural News) Americans of all ethnic backgrounds, socioeconomic status and levels of education are fed up with Nanny State liberalism, Left-wing Marxism, and the Democratic Party in general when it comes to their Second Amendment right to keep and bear arms, as was demonstrated recently at a city council meeting in North Carolina.

While speaking during a meeting of the Greensboro council on the topic of curbing gun violence, Mark Robinson, who is black, blasted members over their desire to possibly cancel an upcoming bi-annual gun show that is held at a local venue.

"When are you all gonna start standing up for the majority? … I'm the majority! I'm a law-abiding citizen who's never shot anybody," Robinson railed. "It seems every time we have one of these shootings, nobody wants to put the blame where it goes, which is at the shooter's feet. You want to put it at my feet! It doesn't make any sense."

"You want to restrict my right to buy a firearm and protect myself from some of the very people you are talking about in here tonight," Robinson continued. "The law-abiding citizens of this community, of other communities, we are the first ones taxed and the last ones considered."

Warming up, Robinson got into it. He noted that elected officials and anti-gun liberals who seek to make it harder or even impossible in some cases for American citizens like him to engage in their right to self-defense make it easier for the criminal element to kill more people more easily.

"It's ridiculous," he said. "I don't think ["Twilight Zone" creator] Rod Serling could come up with a better script."

Robinson dropped more truth bombs. While admitting that he and other law-abiding citizens would turn in their guns if the law required it, "the Crips and the Bloods" — violent street gangs — "are gonna hold onto theirs. And what do you think is gonna happen when you send the police down there to take them?" (Related: Rapper Killer Mike warns that Democrats' gun-grabbing will "progress us into slavery.")

He noted that the police department was already short-handed, overworked, and — importantly — mocked and derided as racist, bigoted, and inherently unfair. He said that the council, and other liberals, seek to demonize the police "while making the criminals victims."

He's right, of course. On every point.

But they should matter, and that was the ultimate point that Robinson was making.

You can take away a right — or limit it so severely that it may as well not exist — but that doesn't take away threats. That won't make the city of Greensboro safer. It won't dispel or disable the criminal element.