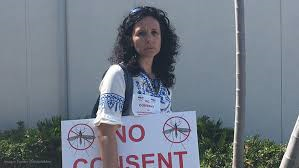 An environmental activist, Milagra de Mier, known as Mila, who had traveled from Key-West, Florida to Washington D.C. to drop off an anti-GMO mosquito petition with nearly 200,000 signatures to the Environmental Protection Agency (EPA) and Food and Drug Administration (FDA), was found dead in her hotel pool on Tuesday morning. Authorities arrived at the Cambria Hotel & Suites Washington, D.C. Convention Center on Tuesday morning after a witness found an unconscious woman floating face down inside the rooftop pool and called 911, according to Fox 5.

According to the report by Fox 5 News:

Authorities said they were called to the Cambria Hotel & Suites Washington, D.C. Convention Center in the 890 block of O Street, NW at about 9:40 a.m.

According to a police report, a witness found an unconscious woman floating inside the rooftop pool and called 911.

When emergency crews responded to the scene they found the woman facedown and attempted to revive her but she was pronounced dead at the scene.