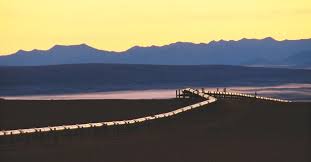 ConocoPhillips is coming off of an incredible exploration season, reportedly the best they've had in over a decade, and they have Alaskan oil to thank for it. The company stuck big in the National Petroleum Reserve-Alaska (NPR-A) this winter, successfully finding oil at all six of their test wells (three exploration and three appraisal), which means chances are good that the trans-Alaska pipeline system could soon be seeing a lot more (much-needed) action.

The Houston-based supermajor has estimated that there are at least 300 million barrels of recoverable oil in its  "Willow Discovery" along Alaska's Western North Slope, and these appraisal wells seem to strongly support that projection. More importantly, this discovery could represent just a fraction of the available reserves along the North Slope, and ConocoPhillips plans to keep exploring the area over another busy exploration season next year, starting with a recent $400 million deal to buy all of Anadarko Petroleum Corp.'s North Slope assets.

Over the next five years, it is projected that ConocoPhillips will be adding 100,000 barrels a day to the trans-Alaska pipeline for a total 650,000 barrels a day, an 18 percent increase. This is great news after years of dwindling volumes--to put today's 550,000 barrels per day in perspective, when the pipeline peaked in 1988 it was funneling  2.1 million barrels of oil per day through Alaska, an economy that relies heavily on oil revenues but has been seeing volatile returns in the past years.

ConocoPhillips' "Willow Discovery" is also a glimmer of hope for Alaska's long-suffering North Slope. Once the powerhouse of the country, many of its once-abundant fields have been sucked dry. Onetime major fields like Prudhoe Bay, the Kuparuk River and the Alpine are now nearly tapped. Now companies like ConocoPhillips are breathing new life into the region, pick

Cod Apocalypse: Feds Close Gulf of Alaska Fishery for the First Time Ever...