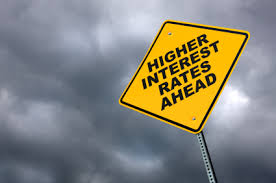 The ten year U.S. Treasury Bonds rose above 3% for the first time since January 2011.  The main reason is speculation that the Fed will seek an increasingly aggressive rise in interest rates.   Yields rose as Fed officials talk of raising interest rates four times this year instead of the previously discussed three times.

Rising interest rates can have a significant effect on the economy and your finances on a personal level.

Any time the Fed announces a federal Funds interest rates hike this increases how much banks pay to borrow money from other banks.  This is passed on to consumers, affecting your credit card debt, savings account, and your mortgage.

It's not all bad news as your rate of interest on your savings account also rises.  Savings rates are at a historical low but you should see some small increase.  Online only banks pay slightly more for savings accounts due to the lack of their overhead costs.

However, homeowners who have variable mortgage rates will see their payments rise as Federal Fund rates rise.  If you have a fixed rate mortgage your payments should not rise.  But if you were hoping to refinance your home mortgage you just missed out some savings since you will no longer be able to lock in that lower rate.

So while the rise in Federal Funds rate isn't all bad news, be sure to read the fine print in your credit, savings accounts, and mortgage contracts.