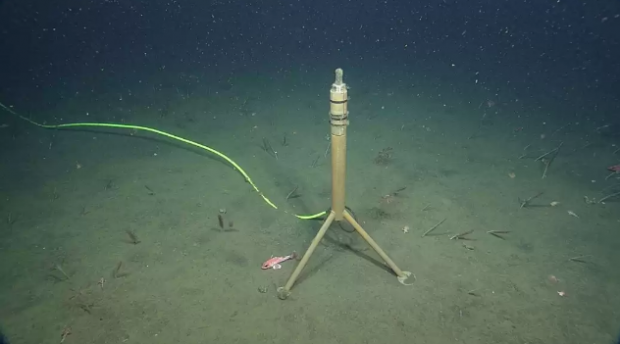 When's the last time you heard the bottom of the sea? Probably never. Right now, I'm listening to the soothing sounds of Monterey Bay from an underwater microphone located 3,000 feet beneath the surface.

It was put there by the Monterey Bay Aquarium Research Institute (MBARI) in 2015, and sits roughly 18 miles off the coast of California. Now, the oceanographic center is livestreaming the weird and wonderful noises of dolphins, sea lions, and other ocean dwellers, for all to enjoy.

The super sensitive microphone, or hydrophone, is attached to MBARI's cabled ocean observatory, the Monterey Accelerated Research System (MARS), which both powers the instrument and provides it with a data connection for relaying the sounds back to shore, 24 hours per day.

The new hydrophone doesn't look very impressive. It's just a metal cylinder about two inches in diameter, mounted on a metal tripod on the muddy seafloor. But it is extremely sensitive and can pick up a vast range of sounds, including those too low and too high for humans to hear.

Many of the sounds you might hear are from animals hanging out near the surface, MBARI says.

High-pitched sounds, such as dolphin clicks, do not travel very far through the water, so if these sounds show up in the stream they are probably being generated within a few kilometers of the hydrophone. However, the low-pitched sounds of ship engines can travel dozens of kilometers, and some whale calls may come from animals hundreds of kilometers from Monterey Bay.

I've been tuning in for an hour, and have so far detected some sort of cetacean noise, and what resembled a boat propeller. The ocean is so cool, guys. If you want to be a pro about it, MBARI made a listening guide so you can determine whether you're hearing "biophony" (the sounds of marine life), "geophony" (the sounds of the earth), or anthrophony (sounds created by humans).

New hypothesis argues the universe simulates itself into existence