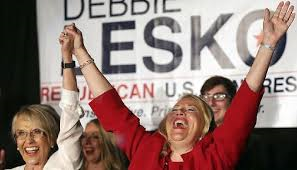 "With so few votes left to actually count, Tipirneni is going to need to win those by a sizable margin to overcome," the polling group added in a tweet a minute later.

The New York Times called the election for Lesko shortly after AP called it at 11:08 p.m.

Congratulations to Debbie on her hard-fought victory. Debbie ran a smart campaign and focused in on the issues that voters cared about, like having more take-home pay, fewer regulations, and a secure border. She is a committed conservative who will make Arizona proud, and I'm excited for her to get to Washington so she can help as we continue to advance our agenda. Her victory proves that Republicans have a positive record to run on this fall and we need to spend the next seven months aggressively selling our message to the American people.