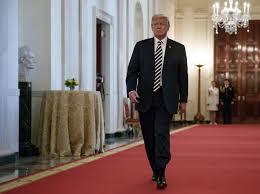 The questions are apparently a road map of inquiry that Mueller and his prosecutors and FBI agents plan to put to the president if the president agrees to sit down for an interview with them.

I have been arguing for months that the president should not agree to an interview with Mueller. My reasons are fairly boilerplate: It is nearly impossible to talk prosecutors who are determined to seek an indictment into changing their minds. As well, the person being interviewed cannot possibly know as much about the case as the team doing the interview, and he will be prone to error.

In the interview environment, one small lie can result in one big headache of an indictment, even if the lie is about an extraneous matter. When federal prosecutors question a potential defendant, who appears voluntarily and is not under oath, the questioners can lie to the person being interviewed, but he cannot lie to them without risk of indictment. Just ask Martha Stewart. This is exquisitely unfair, but it has been federal law for generations.

The Supreme Court has ruled that federal prosecutors and FBI agents can use trickery, deceptions and outright falsehoods — even disguises, verbal traps and fraud — to help them extract information from a witness or person they are investigating. Given the president's well-known propensity to talk at length on many disjointed matters and to think both aloud and unfiltered — witness his 30-minute unannounced telephone interview on live cable television with my colleagues on "Fox & Friends" last week — there is a very serious danger that he would contradict himself and even contradict facts for which the special counsel has hard evidence.

As if all of this were not enough to dissuade a self-confident Trump from sitting down with an all-knowing Mueller and his crew, now come the 40 questions Mueller has told Trump's lawyers he wants to ask the president. Though many of these at first blush appear not to challenge the president's memory or command of facts, consider a deeper analysis.

There are two species of questions here. One set of questions is intended to get the president off on a disjointed monologue to see whether he — as he did on "Fox & Friends" — will admit to something without actually being accused or even asked about it. The others are questions to which Mueller already knows the answers and for which he has irrefutable hard evidence — and the quest is to see whether the president will be truthful.

As well, both types of questions are mere starting points — intended to lull Trump into a comfortable but false sense of security — which would then be followed with curveballs he would have great difficulty trying to hit.

One of Mueller's questions is profound, and I have not seen anything like it in all the literature and legal arguments preceding the Times' revelation this week: "What knowledge did you have of any outreach by your campaign, including by Paul Manafort, to Russia about potential assistance to the campaign?"