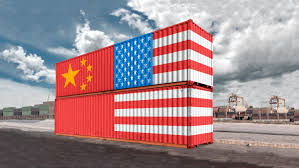 Moments ago, the US trade delegation led by Treasury Sec. Steven Mnuchin, and which included Commerce Sec. Wilbur Ross, US Trade Rep. Robert Lighthizer, and White House trade adviser Peter Navarro, left China after two days of U.S.-China trade discussions ended on Friday without a concrete deal, only an agreement to keep on talking.

On Friday afternoon, China's official Xinhua News Agency reported that both sides reached a consensus on some trade issues, without providing details. More importantly, they acknowledged major disagreements on some matters and will continue communicating to work toward making more progress.

The biggest surprise, according to the FT, is that heading into the talks the US delegation asked China to cut the bilateral trade deficit by $200BN by 2020, reduce tariffs and cut subsidies for emerging industries, according to a document seen by the Financial Times.

The surprise is that the revised $200BN target is already double the $100BN amount that President Trump demanded just two months ago be wiped from last year's $337BN US deficit in goods and services. According to the document, the US aimed to cut the deficit by $100bn in the year beginning June 1, and by a further $100bn between June 2019 and May 2020.

Some more details on the list of US demands from the WSJ:

The first U.S. request was for China to reduce the bilateral trade deficit by at least $200 billion by the end of 2020. The U.S.-China bilateral deficit in goods was $375 billion last year. President Donald Trump has repeatedly said he wants China to slash the figure by $100 billion a year.

The U.S. also demanded that China immediately stop providing subsidies and other assistance for advanced technologies outlined in the government's Made in China 2025 plan. The initiative aims for China to dominate future frontiers of manufacturing and industry, from robotics and aviation to new-energy vehicles.

The U.S. also asked China to cut tariffs on "all products in non-critical sectors" to levels that are no higher than the levels that the U.S. applies to imports, according to the document.

In addition, the U.S. also asked China to guarantee that it won't hit back at the U.S. for any actions taken in the disputes over intellectual property. It also asked that China withdraw its challenges in this area at the World Trade Organization.