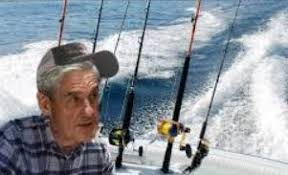 He is under strong pressure to keep the charade going until the November elections, however, so he and his high-priced legal brain-trust have devised a new tactic.

One would think they could come up with something less transparent. After all, Mueller was FBI Director from 2001 to 2013 and knows where the bodies are buried, so to speak. But it does not appear likely that he is going to get his man this time. So, rather than throw in the towel, he is making a college try at cajoling President Donald Trump into helping him out.

Today's New York Times print-edition lede by Michael S. Schmidt, "Questions for President Show Depth of Inquiry Into Russian Meddling," bespeaks an embarrassingly desperate attempt to get President Donald Trump to incriminate himself. And, given Trump's temperament and his dismissive attitude toward his legal advisers, the President might just rise to the bait.