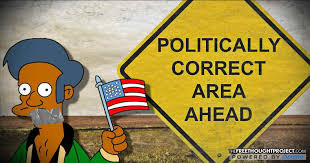 Simpsons creator Matt Groening knew he would stir up controversy when he decided to give life to show character "Apu Nahasapeemapetilon." But maybe he had no idea how much, or didn't care. Whatever his motivation for introducing the world to Apu, his character has predictably drawn the consternation of the politically correct police department.

But according to Groening, the outrage is fake news and those who take offense to the stereotypical Indian character are simply pretending to be offended. In a revealing interview with USA Today, Groening was asked if he had any comments about Apu being a stereotype of the Indian Community.

"Not really," Groening responded. "I'm proud of what we do on the show. And I think it's a time in our culture where people love to pretend they're offended."

One of those concerned citizens to whom Groening was likely referring is comedian Hari Kondabolu. Even though Kondabolu has made a living employing his self-deprecating humor, often making fun of his own Indian heritage, he decided to attempt to kill Apu by making a documentary. "The Problem With Apu," as it is titled, attempts to reveal just how stereotypical, racist, and offensive Apu is to the Indian-American community.

TruTV's documentary even assembled A-list actors to opine about how offensive Apu is to them. Those actors include Kal Penn, Whoopi Goldberg, and others.