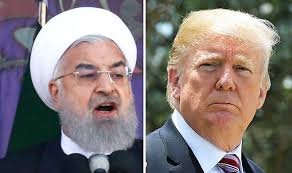 The Israeli propaganda machine is working overtime in the run-up to the May deadline for Trump's decision on recertifying the Iran deal. So what did all that buildup to Netanyahu's big announcement amount to? Less than nothing, i.e., documents that prove what we already knew – that Iran did have a nuclear program prior to 2003. As our own intelligence agencies long ago concluded, they discontinued it and haven't restarted it since then. Oh, but then why did the Iranians keep all these thousands of documents, the Israelis ask. Doesn't this in itself portend a future weaponization program?

Well, no, it doesn't, but then again I doubt whether the Israelis mean to be all that convincing: they're just signaling to President Trump exactly what's expected of him, which raises the question: could someone who glories in his own unpredictability once again do the exact opposite of what's expected of him? The Bolton and Pompeo appointments, the latter's visit to Israel, and Trump's rhetorical opposition to the deal all signal he's going to decertify. Yet what's changed since the last two deadlines, both of which passed without a formal rejection of the JCPOA?

One thing that's changed is the situation on the Korean peninsula, where the prospect of an historic agreement to end the Korean war and rid the region of nuclear weapons is in the works – thanks, in large part, to the Trump administration, i.e. the President himself.