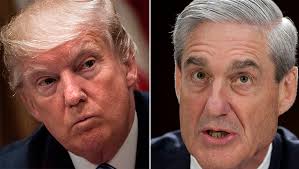 "We don't have to" comply with a possible subpoena for Mr. Trump, Mr. Giuliani said during an appearance Sunday on ABC's "This Week." "I'm gonna walk him into a prosecution for perjury, like Martha Stewart did?" Mr. Giuliani also left open the possibility the president could invoke his Fifth Amendment right to refuse to testify if forced to appear before a grand jury.

Agreeing to a voluntary interview would allow Mr. Trump's lawyers to set conditions, including the length of the interview, the topics raised and whether Mr. Trump could be accompanied by counsel.

"When you volunteer at least maybe you can constrain the questions. When you're subpoenaed, a subpoena is broad. Your lawyer isn't present. This is a tough decision for the president's team to make," Harvard law professor Alan Dershowitz said Sunday on NBC's "Meet the Press.

The high court has weighed in on cases involving presidents before. At the height of the Watergate scandal, the Supreme Court ordered Richard Nixon to turn over tapes and other evidence, but that case didn't deal with testimony. Years later, the high court ruled Bill Clinton didn't have immunity from civil suits, paving the way for his eventual deposition in a sexual-harassment case—but that case didn't deal with questions of testimony in criminal investigations.

In a Memo to Trump, Pat Buchanan says Defy Mueller.

If Donald Trump does not wish to collaborate in the destruction of his presidency, he will refuse to be questioned by the FBI, or by a grand jury, or by Special Counsel Robert Mueller and his malevolent minions.

Should Mueller subpoena him, as he has threatened to do, Trump should ignore the subpoena, and frame it for viewing in Trump Tower. If Mueller goes to the Supreme Court and wins an order for Trump to comply and testify to a grand jury, Trump should defy the court.