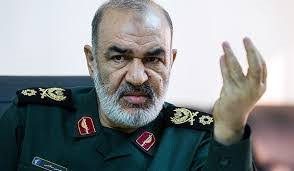 Iran is not afraid of U.S. sanctions or attack, the Revolutionary Guard deputy commander said on Tuesday, ahead of what appears an imminent announcement by U.S. President Donald Trump that the US would leave the nuclear deal Tehran signed with world powers in 2015.

"Our nation is not afraid of U.S. sanctions or military attack. Our enemies including America, the Zionist regime and the allies in the region should know that Iran has prepared for the worst scenarios and threats," Hossein Salami was quoted by Fars news agency.

Over the weekend, speaking to reporters after a Saturday keynote to the Iran Freedom Convention for Democracy and Human Rights in Washington, Rudy Giuliani said "We got a president who is tough, who does not listen to the people who are naysayers, and a president who is as committed to regime change as we are." In other words, pulling out of the Iran nuclear deal is now being conflated with regime change in Iran.