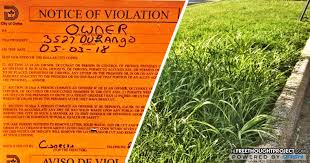 Dallas, Texas – A homeowner who was severely injured after a natural gas explosion destroyed the heating unit in his home and left him with second-degree burns, was threatened by the city that he could face fines because he was not able to mow his lawn while he was in the hospital.

However, the man and his family have not been allowed on their property for nearly 3 months, and the violation was posted on the same fence that already had a "WARNING: Keep Out!" sign barring residents from the premises.

The homeowner was injured after the heating and AC unit in his home exploded in February, causing second-degree burns that left him recovering in the hospital, according to a report from NBC 5. Not only was he physically unable to mow his lawn, but he could not send anyone else to do it because he was not allowed to access his property and any "litter" that accumulated on it was left there by workers who were working on the gas lines.

The man's house was one of several that were damaged by natural gas explosions, and homeowners complained that the company responsible, Atmos Energy, did nothing to alert residents about an ongoing gas leak. An entire neighborhood was evacuated and nearly 3,000 residents lost their gas service while Atmos has worked to repair gas lines.