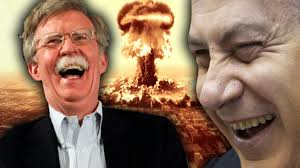 Prime Minister Theresa May of Great Britain, President Emmanuel Macron of France and German Chancellor Angela Merkel were put on notice that their ties to Iran are to be severed, or secondary sanctions will be imposed on them.

Who is cheering Trump's trashing of the treaty?

The neocons who sought his political extinction in 2016, the royals of the Gulf, Bibi Netanyahu, and the Islamic Revolutionary Guard Corps. The IRGC had warned Iranians that the Americans were duplicitous.

When Trump finished speaking, Bibi launched strikes on Iranian bases in Syria, and flew to Moscow to persuade Vladimir Putin not to give the Iranians any air defense against Israeli attacks.