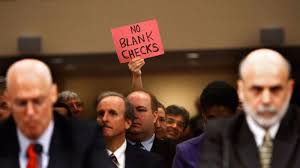 If you're looking for insights into what Central Banks have planned when The Everything Bubble bursts, on Monday one of the European Central Bank's (ECB) top bankers provided a blueprint.

Benoît Cœuré, has been a member of the Executive Board of the ECB since 2011. As such is one of SIX individuals who have dictated ECB policy during that time.

This means he's been involved in:

The second and third Greek bailouts.

The second and third Romania bailouts.

Cœuré has operated at the highest level of monetary/ financial policy during a period in which numerous financial/banking systems were experiencing systemic risk.

Put simply, there are fewer than 100 people on the planet who are as familiar with how Central Banks perceive the risks in today's financial system as well as the policies said Central Banks will unleash when the next crisis hits.

With that in mind, let's take a look at what he had to say regarding both in the speech he gave titled The Future of Central Bank Moneyat the International Center for Monetary and Banking Studies in Geneva yesterday.

In my remarks this evening I would like to share some more general thoughts on the role of the central bank's balance sheet in the economy. My focus will be on central bank liabilities – that is, money created by central banks to be used as a means of payment and store of value…

What distinguishes the discussion today from previous discussions, however, are three new facts:

The first is that we are seeing a dramatic decline in the demand for cash in some countries, in particular Sweden and Norway.

The second is that central banks today could make use of new technologies that would enable the introduction of what is widely referred to as a "token-based" currency – one based on a distributed ledger technology (DLT) or comparable cryptographic technology.

And the third "new" fact, at least from a long-term perspective, relates to the role of central banks in setting monetary policy, and more recently to the emergence of negative rates as a policy instrument and the consequences for the transmission of monetary policy.

Reading between the lines, Cœuré is talking about:

Potential cash bans in tandem with negative interest rates (the problem with physical cash is it allows you to avoid paying interest via NIRP because you can simply store it yourself instead of keeping it in a bank).

Shifting over to a completely digital currency controlled by a Central Bank.

Cœuré finishes by stating that the near-term benefit of this is minimal, but that in the medium term…

…a more incremental reform could consist of giving a broader range of financial market participants access to the liability side of the central bank's balance sheet,provided that this can help strengthen the transmission of monetary policy in an environment of excess liquidity.

"It's Dangerous" - Bill Gross Warns Investors Have Been Lulled Into "Dreamland

Well that explains everything: Bankers bullied Australia into Net Zero

Meet the Biden Nominee Who's Sympathetic to Soviet-Era Socialism--