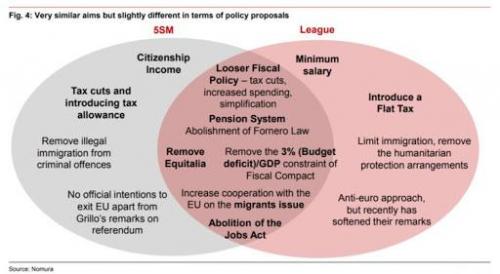 Now, eight years later, despite all the talk of 'recovery' and 'global synchronous growth' and 'normalization', Italy's newly-formed coalition of The League and Five Star (which some have likened to Trumpian 'nationalist' Republicans merging with Bernie leftists) have put forward a plan that, among other things, includes the introduction of a parallel currency for Italy - 'mini-BOTs'.

The chart below, created by analysts at Nomura, shows where both stand on key policy issues, highlighting both their similarities and their differences as they prepare to govern together.

It is the Italian euroskepticism that dominates market concerns. Investors were initially spooked by a section where the nascent coalition floated plans to ask for €250 billion in debt forgiveness for the country. But, as Credit Suisse argued,

"A markedly Eurosceptic prime minister... as well as concrete support for the introduction of a parallel currency (so-called Mini-BOTs'), would be major negatives, in our view."